Korcula often gets called “mini Dubrovnik”. Although I like to think of Dubrovnik as a “big Korcula”! I think the comparison to one of Croatia’s most visited destinations is understandable, but Korcula has its own personality and merits. So what is Korcula known for?

For the majority of people who join us on a tour, they are always surprised by the quality of the wine from Croatia. Most people only get to try it within the country, as very little is exported.

Croatia has been producing wine for centuries and has a number of indigenous grapes that are often location-specific. So on Korcula, the two most famous wines which originate from the island are Grk and Posip. Grk grows almost exclusively in the sandy soils in the village of Lumbarda and is believed to have originally bought by the Greeks in the 3rd century. Maybe it is more than a coincidence that the word Grk means a male Greek. Posip is a natural cross between two other local vines and was discovered in the 1830s by a farmer in the village of Smokvica. Today Posip is grown throughout Smokvica and the neighbouring village of Cara, as well as further afield across Croatia.

Honestly, since moving to Korcula I have such an appreciation of the humble olive! Similar to the grapes grown on the island, Korcula has several specific types of olives trees including Lastovka and Drobnica. And similarly, very little Croatian olive oil is exported – but it’s delicious!

The island is scattered with olive trees, many planted on the walls that historically were used for growing vines. Most families have some olive trees and harvest yearly in late October into November. The olive oil is rich in polyphenols which is exceptionally good for us and has a wonderful fresh not too bitter-not too sweet flavour.

If you have a sweet tooth, you will not be disappointed by the sugary delights from Korcula. One of the most well known is cukarin. This is like a firm a cookie/biscuit shaped into a crescent flavoured with orange and lemon peel. The original recipes include Ammonium bicarbonate! Everyone has there only special recipe and the best places to try are Cukarin sweet shop in Korcula Town and Skatula in Sveti Antun.

So often we meet people who are visiting the island who remark how chilled out this place is in comparison to where they’ve come from – Dubrovnik, Split, Hvar….

If one thing Korcula and Korculians do extremely well at, it’s relaxing! Enjoying a lengthy coffee without having to rush off somewhere. Spending a late afternoon at one of the stunning beaches. Fjaka-ing around the centre of the town or village. Translate fjaka: a state of nothingness! An aimless stroll along the coastline. You get it!

It’s not laziness, it’s just the art of relaxing!

OK. I know this is extremely controversial, so feel free to leave your comments below if you’re got something to add about this!

For those of you who may have never heard this story, Korcula believes that the legendary explorer Marco Polo was born on the island. We have a house, a wax-work museum retelling his life story and numerous cafes, ice-cream shops & restaurants named after him. There are also people on the island with the family name “De-Polo”.

People have done lengthy research to prove he was born and not Italy. It is also speculated that he was here during the Battle of Curzola (Korcula) between the Venetians & Genoese in 1298.

What do I think? Well, I think there is a strong chance he was born here. However, he was from an Italian family and Korcula was part of Venice during the time he was here. So if he was born here, did it make him Croatian?

The sword dances are traditionally performed on saint or other religious or community days. During the summer several additional performances are put on. The sword dances depict various stories around good and bad – of course the good is always victorious.

When a greek colony arrived at the island they named it Melaina Korkyra, which translates as Black Corfu. They named it after their homeland (Corfu) and the dense pines-woods that cover the island.

After once getting incredibly lost on the island, we can vouch for just how dense the woods are! The woodlands provide the perfect habitat for the wild boars and hares that roam the island.

So I cannot write about what Korcula Island is known for without mentioning the Old Town, which forms part of Korcula Town. Much of the architecture within in the Old Town was constructed when Korcula was under the rule of the Venetians.

The most notable features include the majestic St Mark’s Cathedral located in the centre, Marco Polo’s famed house, the layout of the streets which resemble a herringbone pattern facilitating air flow whilst blocking strong winds and a cocktail bar housed in on of the old towers!

The Old Town is compact and can easily be navigated and explored within a couple of hours. You’ll find an array of souvenir shops, restaurants and bars here as well.

Obviously, I am hugely biased, but I really do think Korcula is one of the most beautiful places in Croatia. From the dream-like beaches to the carpets of evergreen trees, it really is difficult to find an “ugly” bit of Korcula. Every sunrise and sunset is memorable. Even in the rain, the sea finds a way to stay enchanting!

What to eat & drink on Korcula

Thanks for requesting our free Korcula Eating & Drinking Guide! Please check your inbox for an email from us with a link to download your guide. If you don't see it, check your SPAM and make sure you whitelist our email address. 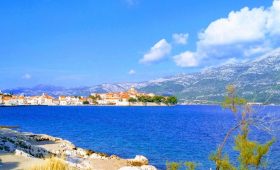 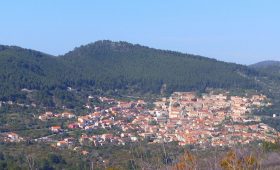 Smokvica Village – Where to Stay & Things To Do 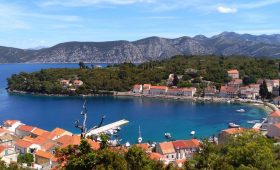 Racisce Village – Where to Stay & Things to Do

Thanks for requesting the free Korcula Eating & Drinking guide. Head to your inbox, the guide is on its way.